More than 16-million men and women were in service during WWII. In their honor, the American Red Cross offered a commemorative knitting kit several years back, based on the Knit Your Bit campaign they introduced in the early 1900s. The tin included yarn, needles, and a reproduction of the original instructions for one pair of men's socks. 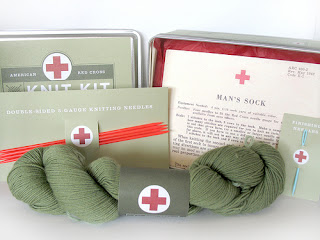 According to the Red Cross, "The Knit Your Bit campaign began in World War I, but became a critical part of providing aid and comfort to American troops during the Second World War. As textile producers and factories were converted to support strategic military needs, volunteer knitters were called upon to help supply soldiers with warm clothing for harsh climates. Red Cross patterns were designed to be compatible with their uniforms and equipment. Wool yarn was provided by the Red Cross as well as the design specifications that were to be met." 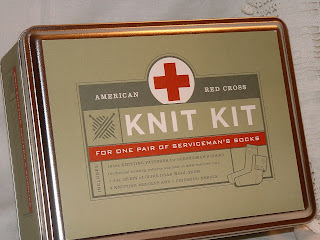 "If the garments did not pass inspection, they were ripped out and redone," says Steve Shulman, Executive Director of the American Red Cross Museum in Washington D.C.  He explains that with rationing such a concern, conservation of resources was a priority as well. "Any leftover yarn or rejected pieces were returned to the Red Cross and recycled for use by another knitter," says Shulman. "Not a bit of it went to waste." 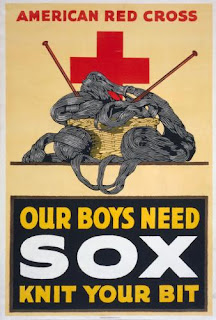 I purchased a kit when they were first available. (The underside of the lid features the original Knit Your Bit poster!) I didn't get around to making the socks right away and then I forgot about them. But this summer I brought the tin downstairs and I'm determined to start working on the socks. When I've finished, I'll use the tin to store some of my knitting accessories.
Posted by Haworth at 15.8.12