Every year at this time I think back to what it felt like as a child to know that summer vacation was about to start and the next few months would be one long, lazy and idyllic landscape of playing whiffle ball in the street at night after supper; riding my bike up to the Schultz's house to play; sitting on the Coca-Cola cooler in Jimmy's Market, legs dangling, drinking a Gold Nugget soda; reading the latest Nancy Drew or Happy Hollister book in the crook of a tree in Frank Duffly's yard; or chasing the ice-cream truck down the street  for a "Drumstick".  (The sound of our screen door slammming -- a kind of low squeak, followed by a sturdy thud -- is a sound that I hope never, ever falls through a crack in my memory bank.)

All those memories came flooding back recently when I received an insightful essay in my email (author unknown) about what it meant to survive growing up in my day.  (You know, back when dinosaurs roamed the earth.)  So here's a shout out for growing up on the edge, 50s style, with a tip of my old baseball cap to the author, whoever you might be.

First, we survived being born to mothers who smoked and/or drank while they were pregnant.

They took aspirin, ate blue cheese dressing, tuna from a can and didn't get tested for diabetes.
Then after that trauma, we were put to sleep on our tummies in baby cribs covered with bright colored lead-base paints.

We had no childproof lids on medicine bottles, locks on doors or cabinets and when we rode our bikes, we had baseball caps on our heads, not helmets.
As infants & children, we would ride in cars with no car seats, no booster seats, no seat belts, no air bags, bald tires and sometimes no brakes.
Riding in the back of a station wagon was routine, but bouncing around in the back of a pick- up truck on a warm day was always a special treat.

We drank water from the garden hose and not from a bottle.

We shared one soft drink with four friends, from one bottle and no one actually died.

We drank Kool-Aid made with real white sugar. And, we weren't overweight. Why? Because we were always outside playing.
We would leave home in the morning and play all day, as long as we were back when the streetlights came on.  No one was able to reach us all day.  And, we were okay.

We would spend hours building our go-carts out of scraps and then ride them down the hill, only to find out we forgot the brakes.  After running into the bushes a few times, we learned to solve the problem.

We did not have Play stations, Nintendo's and X-boxes.  There were no video games, no 150 channels on cable, no video movies or DVD's, no surround-sound or CD's, no cell phones, no personal computers, no Internet and no chat rooms.  Instead we had friends, and we went outside and found  them.
We fell out of trees, got cut, broke bones and teeth and there were no lawsuits from these accidents.

We would get spankings with wooden spoons, switches, ping pong paddles, or just a bare hand and no one would call child services to report abuse.

We ate worms and mud pies made from dirt, and the worms did not live in us forever.
We were given BB guns for our 10th birthdays, made up games with sticks and tennis balls and, although we were told it would happen, we did not put out very many eyes.

We rode bikes or walked to a friend's house and knocked on the door or rang the bell, or just walked in and talked to them.

Little League had tryouts and not everyone made the team.  Those who didn't had to learn to deal with disappointment.  Imagine.

And the idea of a parent bailing us out if we broke the law was unheard of.  They actually sided with the law.

The 40s, 50s, 60s, and 70s have produced some of the best risk-takers, problem solvers and inventors ever.  The past 70+ years have been an explosion of innovation and new ideas.  We had freedom, failure, success and responsibility, and we learned how to deal with it all.

(Kind of makes you want to run through the house with scissors, doesn't it?)
Posted by Haworth at 31.5.11 No comments: 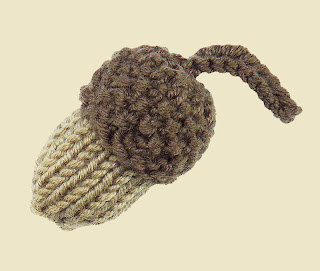 During my first visit to Oxford, there was a fancy dress ball at one of the colleges. Several of my acquaintances were going, but their plans had been made long before my arrival and there was no hope of my attending on such short notice. I resigned myself to spending a quiet evening on my own, investigating some of the lovely old quadrangles and alleyways.
A young fellow I'd only just met (but already liked a good deal) had made arrangements to attend the ball with a group of friends.
Just before sunset, I stood in the college courtyard, waving to everyone as they piled into cabs to go to the dance. As my new friend hurtled past, black tie still undone, he stopped briefly to apologize for leaving me behind. I only laughed good naturedly.
"I do feel a bit like Cinderella," I grinned, "with everyone going to the ball but me!"
He smiled and leaned over, whispering in my ear, "Ah, but Cinderella ended up with the Prince in the end, didn't she?"
We ended up the best of friends, visiting one another as often as we could and occasionally traveling together throughout England, Wales, and even Paris, having the most outlandish adventures. He asked me to marry him once but I gently turned him down, convincing him that it was a terrible idea. Thankfully he laughed and agreed. 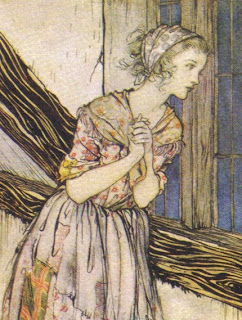 In my darkest moments, when things are their bleakest and it seems that whatever hopes or dreams I have are destined not to be realized, I remind myself that life is full of fairy godmothers, and despite how grim things might seem, Cinderella does always end up with the Prince in the end.
Posted by Haworth at 26.5.11 No comments:

Let's hear it for mystery, surprise, and a little light-hearted gaiety 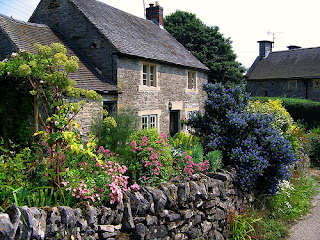 With their mystical charm and romantic aura, English cottage gardens exhibit a style that is the direct result of having been born of a Romantic movement in literature and art -- a movement against Classicism and its appreciation for order, discipline and moderation.

One of the most famous English cottage gardens was designed by none other than the French Impressionist painter, Claude Monet (1840-1926). No discipline exerted a stronger influence on garden design than did landscape painting. It was a case of "life imitating art," if you will. Monet is a particularly interesting case, being not only an artist who painted landscapes but also someone who was active in garden design. With Monet, the influence went both ways.

English cottage gardens, with their wild abundance of rose bushes, perennial flowers, vine-covered arbors, and plants tumbling over walkways, are widely emulated in America. It is an informal style meant to evoke a mood of light-hearted gaiety, letting the eye feast on a diverse jumble of flowering plants, distributed in a seemingly haphazard manner, evoking thoughts of a "natural landscape." The plants themselves are just as important as their use in the overall composition, and the wildness of the arrangement is meant to suggest a closer communing with nature.

Cottage gardens don’t have to take hours to look after. By choosing the right type of features one can plan a garden that almost takes care of itself. Cottage gardens are all about plants. Hard landscaping, such as paths, seating areas and containers, is just there to help you enjoy them. Hard surfaces contrast well with plants so use them to break up large areas of planting. Several different climbers can share the same support, whether it is a tree, pergola or arbour. It’s a good space-saving technique that creates colourful features for months on end. Containers are the convenient way to add lots of extra colour around your back door, close to seats and benches, and on the patio. Old bits and bobs like chimney pots, earthenware land drainage pipes and bottomless metal buckets can be recycled to make authentic, aged features that all add to the character  and charm of a cottage garden.

What's in a name?


Only in the garden can you find such whimsical company!

Cup and Saucer Vine
Student Parsnip
Cupid's Dart
Flower of an Hour
Danvers Half-Long Carrot [which half, one might ask]
Heartsease 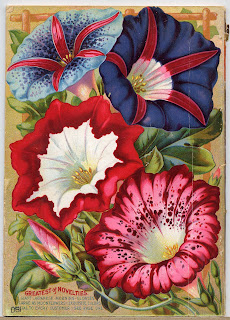 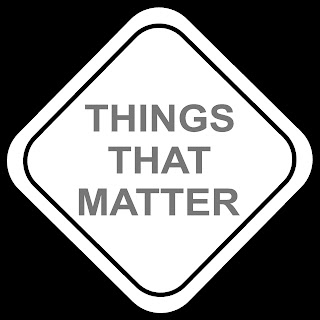 There was a book I saw once on a shelf in a church library. It couldn't have been more than half an inch thick and when I turned my head to read the title I laughed out loud:

The Lady and the Unicorn 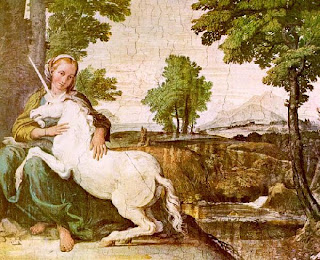 And so it came to be, throughout time, that no one believed in Unicorns.
And that is how they remained hidden, and quite safe.
Posted by Haworth at 10.5.11 No comments: