Dearest friends and followers who have written to me here over the past year...

My goodness do I feel utterly stupid.. as in, if there was a village in need of an idiot, I would have a full time job.

When I didn’t see any comments to my last post (July 2017) I simply assumed no one was following my blog any longer and so I stopped posting. But I had completely forgotten that I have the comment function set up so I have to APPROVE them before they get published.... something I only just discovered today, to my chagrin! Chalk this up to my being too long away from blogging, I guess, and out of practice.

In any case... I am writing now to extend a belated but extremely heartfelt thank you to each of you for your lovely, caring comments on my last post. I shall endeavor to resume blogging, although I’m not certain as to how often this will be. (And when I do I promise to moderate the comment function!?)

Wishing each of you well and looking forward to reading your blogs again and contributing my own whimsical thoughts and observations here at Cottage Industry when I can. 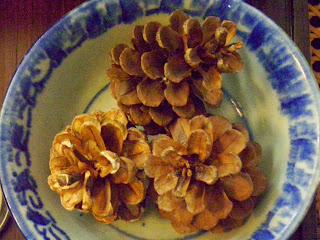 When we last left our heroine....

First of all, my sincere apologies for disappearing for so long. For better or worse, I am one of those people who gets flustered and freezes like a deer in headlights when life gets even marginally complicated, hectic, or physically demanding. I did fully intend to resume blogging, more times than I can count, but the more time that passed the more difficult it became to get back to it.

For the rest of 2014 -- after my May Day post -- and for nearly all of 2015 I was up to my elbows in house projects. New ceilings, painting walls and woodwork, converting my tumbling down garage into a proper garden shed, a new furnace (and removal of the old), as well as several major purchases, e.g., fridge, washer, dryer, mattress. All in all things were a bit madcap and the "To Do" list seemed relentless. So much so that I rounded off 2015 by telling my colleagues at work that I had decided to retire. Retirement, as some of you might already know, is fraught with at least 137 things one has to do. But all went smoothly and I was released into my own custody as a lady of leisure in February 2016.

I fully expected to recommence blogging, in between lots of knitting, lots of reading, and lots of gardening, but within a few months of retirement I became ill and last November I was diagnosed with Stage IV Non Hodgkins Lymphoma. By December 1st I was in hospital for the first of six cycles of aggressive chemotherapy. My treatment lasted until early April of this year and various complications meant that during those five months I had to spend nearly 73 days in hospital. The upside was that I learned where they kept the popsicles ... and I lost 40 lbs. (I reworked my favorite line from The Devil Wears Prada: 'I'm just one chemo cycle from my goal weight.')

As a fellow blogger wisely said, one doesn't battle cancer, one battles the treatment. (Which really is like being carpet-bombed with pesticides.) But despite the challenges and setbacks, I'm relieved to say my latest two PET scans show that I am in remission. I can only attribute this to the love and support of my family and friends, the brilliance of my remarkable doctors, and the combined power of prayer and magical thinking. God and Science may seem like strange bedfellows to some, but as far as I'm concerned they work together very well.

So... here I am, back again, hoping to be able to check in now and then to jot down, as I said long ago, some 'quirky and inconsequential musings'... scattered though those musings might be for awhile. Oh, and if I don't make sense please just be patient and ignore me. Like they say: 'This is chemo. This is your brain on chemo.'

I enjoy the tradition of hanging a May Basket
on an unsuspecting neighbor's door.

(Although if you do it often enough,
how unsuspecting can they really be?)


This morning a light rain was falling as I tip-toed through my garden,
snipping grape hyacinth, forsythia, cherry blossoms, and myrtle. 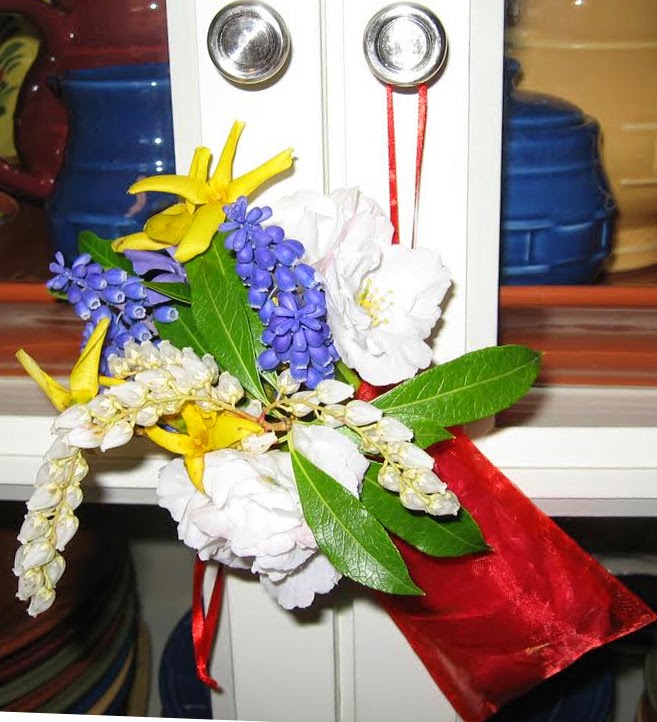 Hail, sweet month of May!
Hail, bright month of May!
Bring sunshine with thee,
Chasing clouds away.
March has left us sighing
In cold and chilly blast,
April's tears have fallen,
May has come at last!
—Anon.
Posted by Haworth at 1.5.14 4 comments:

Mirror, Mirror, on the wall...

Queen: Slave in the magic mirror, come from the farthest space,
through wind and darkness I summon thee. Speak! Let me see thy face.
Magic Mirror: What wouldst thou know, my Queen?
Queen: Mirror, mirror on the wall, who is the fairest one of all?

When I was very small, and would visit my paternal grandmother's house, one of my favorite pastimes was standing on a small stool to look into her "Snow White" mirror.

It wasn't a "Snow White" mirror, of course, since no one spoke back to me despite my conjuring. All I saw was my own round, freckled face peering back at me.

But it certainly looked like the mirror that the wicked Queen questioned in the faery tale.

When my grandmother passed away, my aunt asked if there was anything of hers I would like.

"Her Snow White mirror!" I said, knowing she would know immediately what I meant.

At times I have been tempted to paint it... perhaps a soft white for more of a cottage look. But then, you see, it would no long be the Snow White mirror. And so it remains as it was. Gilded, baroque, perhaps a bit forbidding, and magic in its own way.


Mirror, mirror, on the wall
Who is the fairest one of all? 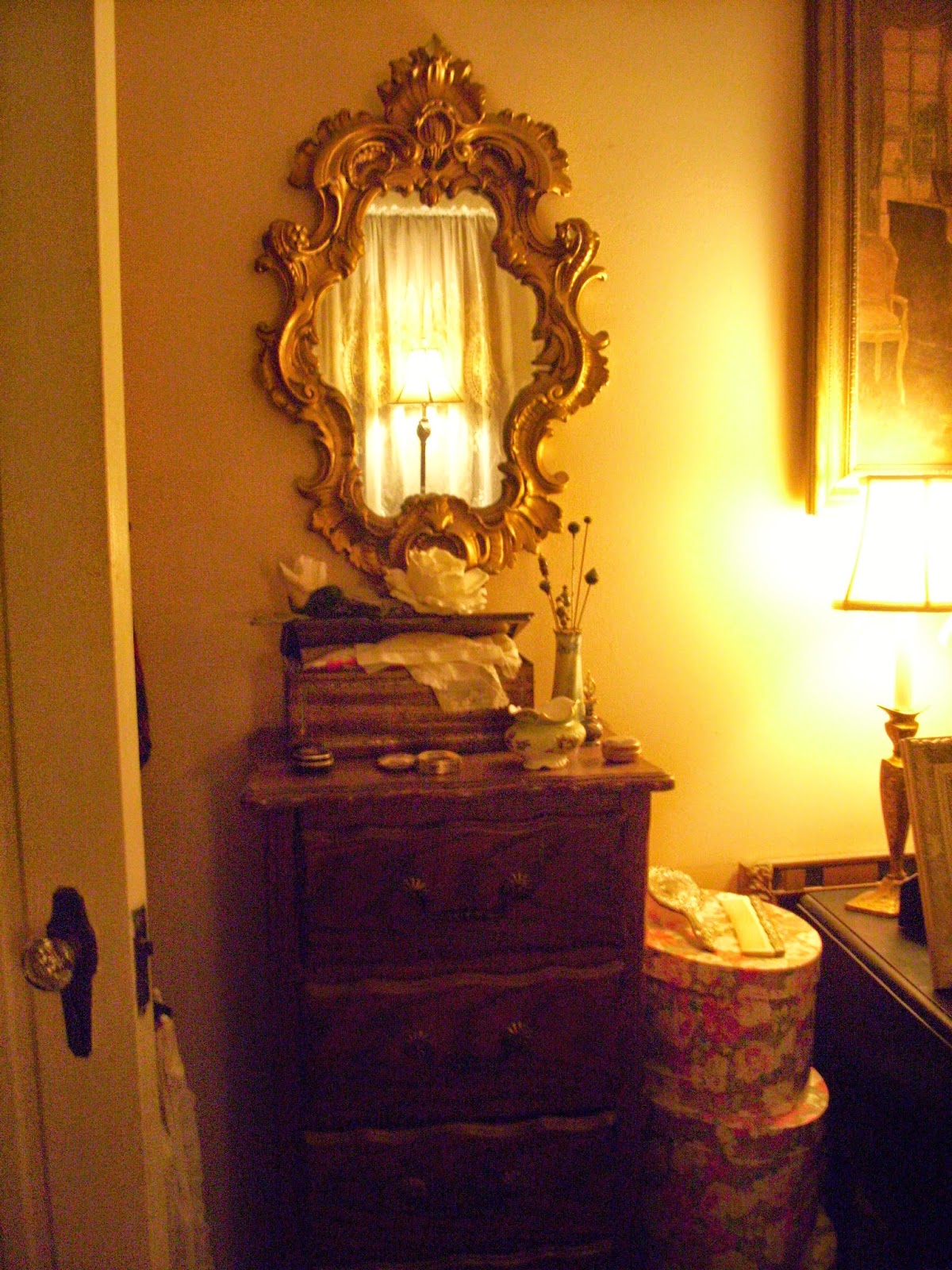