Here's a test of your patriotic prowess ... compliments of Old Sturbridge Village.
The Continental Congress voted for independence from Great Britain on July 4, 1776.

a. True
b. False
The Liberty Bell was located in this city:
a. Boston, Mass.
b. Washington, D.C.
c. Philadelphia, Penn.
d. New York City, N.Y.
The Declaration of Independence begins with what words?
a. Once upon a time ...
b. When in the course of human events ...
c. Four score and seven years ago ...
d. It was the best of times, it was the worst of times ...
What famous document begins with these words: "We the people of the United States, in order to form a more perfect Union, ..."?
a. The Constitution
b. The Articles of Confederation
c. The Magna Carta
d. The Emancipation Proclamation
What is the name of the oldest commissioned U.S. naval vessel?
a. The Monitor
b. The Merrimack
c. The John Paul Jones
d. The Constitution
Whose signature is largest on the Declaration of Independence, reportedly so that the King of England could read it without his glasses?
a. Benjamin Franklin
b. Roger Sherman
c. John Hancock
d. Thomas Jefferson
The first 10 amendments to the Constitution are familiarly known as:
a. The Top 10
b. The Bill of Rights
c. The Magna Carta
d. The Emancipation Proclamation
The Declaration of Independence lists "Life, Liberty and the pursuit of Happiness" among our "unalienable rights." An early draft, however, listed instead: "Life, Liberty and the pursuit of ______________.":
a. Property
b. Frivolity

c. Pleasure
d. Personal Gain
The only man to sign the Articles of Association, the Declaration of Independence, the Articles of Confederation, and the U.S. Constitution was John Adams.
a. True
b. False
Which two patriots died on July 4, 1826 -- within hours of each another -- on the 50th Independence Day celebration?
a. George Washington & Benjamin Franklin
b. Thomas Jefferson & Jefferson Davis
c. John Adams & Thomas Jefferson
d. Alexander Hamilton & Aaron Burr
On July 4th, where can you find celebrations that include fifes and drums, cannon fire, a 19th-century parade, music and dancing, a children's garden tour, toasts to independence, toy hot-air balloon flights, and a dramatic reading of the Declaration of Independence?
a. Disney World
b. Sea World
c. Yankee Candle
d. Old Sturbridge Village
The signing of the Declaration of Independence took until August 2, 1776.
a. True
b. False 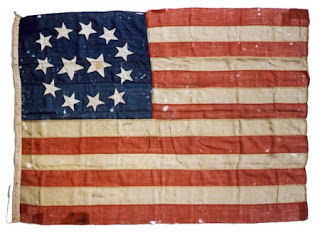