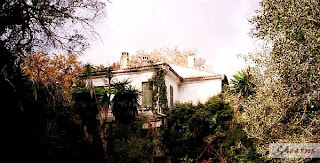 When I first discovered the books of Gerald Durrell (1925-1995) I couldn't put them down to take care of even the most rudimentary personal or gastronomical tasks.  He is British (enough said, for those who enjoy their dry, understated but deadly wit) and his speciality is memoir, namely his recollections of his childhood.

The biographical notes one finds about him are a clue to his unique upbringing and ultimate writing style:  Born in Jamshedpur, India, Gerald was the youngest child of Louisa and Lawrence Durrell (both of whom were also born in India of English and Irish parents).  Durrell spent most of his time in the company of an ayah (nursemaid) and attributed his lifelong love of animals to his first memorable visit to an Indian zoo. The family moved to England after the death of his father in 1928 and settled in South London, where Durrell "frequently stayed home from school by feigning illness". In 1935, Mrs. Durrell moved her three youngest children (Gerald, Margo and Leslie) to the Island of Corfu, where her eldest son Lawrence (the author) already lived with his wife. It was here that Gerald's long love affair with insects, birds and beasts flourished. In fact he frequently terrorized his long-suffering family with a menagerie of local animals he insisted on keeping as pets in the home.

Durrell is a wonderful writer, and his books contain the most beautifully evocative passages about their Island home.  Here is his description of his first glimpse of Corfu: 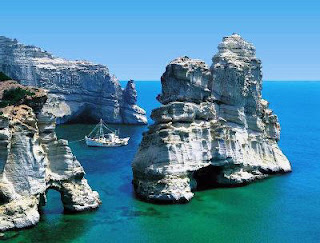 The tiny ship throbbed away from the heel of Italy out into the twilit sea, and as we slept in our stuffy cabins, somewhere in that tract of moon-polished water we passed the invisible dividing line and entered the bright, looking-glass world of Greece. Slowly this sense of change seeped down to us, and so, at dawn, we awoke restless and went on deck.
The sea lifted smooth blue muscles of wave as it stirred in the dawn light, and the foam of our wake spread gently behind us like a white peacock’s tail, glinting with bubbles. The sky was pale and stained with yellow on the eastern horizon.  Ahead lay a chocolate-brown smudge of land, huddled in mist, with a frill of foam at its base.  This was Corfu, and we strained our eyes to make out the exact shapes of the mountains, to discover valleys, peaks, ravines, and beaches, but it remained a silhouette.  Then suddenly the sun lifted over the horizon, and the sky turned the smooth enamelled blue of a jay’s eye. The endless, meticulous curves of the sea flamed for an instant and then changed to a deep royal purple flecked with green. The mist lifted in quick, lithe ribbons, and before us lay the island, the mountains as though sleeping beneath a crumpled blanket of brown, the folds stained with the green of olive groves.  Along the shore curved beaches as white as tusks among tottering cities of brilliant fold, red, and white rocks. We rounded the northern cape, a smooth shoulder of rust-red cliff carved into a series of giant caves.

I knew I had fallen in love with this man when I read his note of thanks to his mother in the introduction to his first book:

I should like to pay a special tribute to my mother, to whom this book is dedicated. Like a gentle, enthusiastic, and understanding Noah, she has steered her vessel full of strange progeny through the stormy seas of life with great skill, always faced with the possibility of mutiny, always surrounded by the dangerous shoals of overdraft and extravagance, never being sure that her navigation would be approved by the crew, but certain that she would be blamed for anything that went wrong. That she survived the voyage is a miracle, but survive it she did, and, moreover, with her reason more or less intact. As my brother Larry rightly points out, we can be proud of the way we have brought her up; she is a credit to us. That she has reached that happy Nirvana where nothing shocks or startles is exemplified by the fact that one week-end recently, when all alone in the house, she was treated to the sudden arrival of a series of crates containing two pelicans, a scarlet ibis, a vulture, and eight monkeys. A lesser mortal might have quailed at such a contingency, but not Mother. On Monday morning I found her in the garage being pursued round and round by an irate pelican which she was trying to feed with sardines from a tin.

“I'm glad you've come, dear,” she panted; “this pelican is a little difficult to handle.”
When I asked her how she knew the animals belonged to me, she replied: “Well, of course I knew they were yours, dear; who else would send pelicans to me?”
Which goes to show how well she knows at least one of her family.
Lastly, I would like to make a point of stressing that all the anecdotes about the island and the islanders are absolutely true. Living in Corfu was rather like living in one of the more flamboyant and slapstick comic operas.

I highly recommend "My Family and Other Animals" and "Birds, Beasts and Relatives". 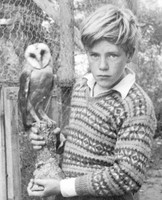 Gerald Durrell.... the young man and the old. 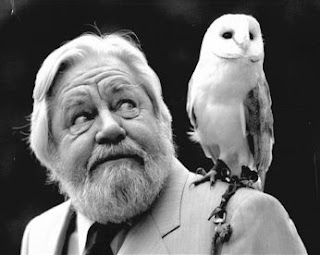