In praise of the unpredictable 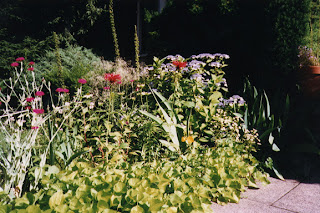 This morning was just so lovely, waking to the sound of birds singing in the garden. I am so content now that the warmer and longer days are here. Having so many hours of daylight is like having another entire day to "play".

I'm counting the weeks until I can work outside in earnest and continue some of the projects I started last year. Only time will tell if I can make the gardens look the way I imagine them in my mind. (Alas, many projects never quite materialize as originally conceived.) I also have a list of house chores that I hope to get through and, of course, there must be time set aside for being restful . . . watching films, knitting, reading.

I recently re-discovered this poem by Langston Hughes:

Let the rain kiss you.
Let the rain beat upon your head with silver liquid drops.
Let the rain sing you a lullaby.
The rain plays a little sleep-song on our roof at night -
And I love the rain.

I love the rain, too. Especially drizzly summer nights and mornings and those days when it feels as if it wants to rain but just can't. The garden can get so dry in mid-summer and watering it is always such a spectacle as I lock wills with yards and yards of green hose. ("Take care that she not smite thee with her mighty tale!")

I was happily surprised by some new faces in the garden this week: Primroses, tulips, white and purple violets, and a host of greenery heralding the wakefulness of many other plants.

Ah me, so much about gardening has to do with those passages we can rely on year after year, but then there are those capricious moments we don't expect.  (Like this morning's gentle mist deteriorating into a full-blown gale with thunder, lightening and heavy rain!)  But I can't help thinking that it's the fanciful, rather than the predictable, that makes gardening so maddeningly enjoyable.
Posted by Haworth at 28.4.11 No comments: 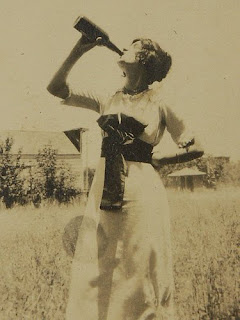 Ghosts of times past

The campus looked so beautiful in the rain on Monday evening. The old lamps glimmered with a soft yellow light and when I looked past them to the 18th and 19th c. buildings, I forgot for moment when and where I was.

"It has looked this way for hundreds of years......"
Yes, it has.
The main green was blissfully quiet.  Only those few who had someplace to go were out and about, safe and solitary beneath umbrellas.  And it was a perfect rain: heavy enough to feel the place was entirely my own, but warm and fragrant enough to keep me from hurrying.  I could have walked in it, along those ancient pathways, for hours!
Posted by Haworth at 28.4.11 No comments: 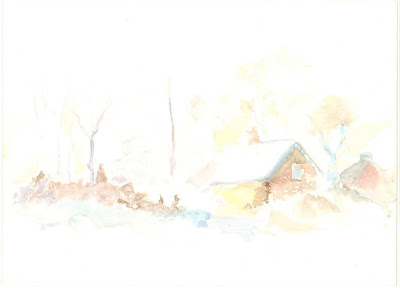 Inspired by my brother's house up north.

A flatboat steaming down the Mississippi at dawn.

Morning Glory twining itself around my front railing.

A paddleboat making its way down the Mississippi.

Dragged by my heels into modern times

I went to one of my favorite second-hand bookshops last week and came away with an armload of books. It never occurs to me to wonder where all these new literary "friends" will go. It's not until I walk through the door and see all the little stacks of books everywhere that I realize my house is becoming more and more like a library.
One of the books was a paperback copy of Light in August by William Faulkner.  I'm embarrassed to say that it's the first and only book I've ever owned by this author.  In fact it's one of the only books I've ever owned by a modern-day "classic" American writer. Unlike all of my well-read contemporaries, I've never read anything by the so-called "lions" of 20th century American literature:  Hemingway, Fitzgerald, Steinbeck, Faulkner.
This doesn't mean that I haven't read recent books, and by recent I mean by authors who are actually still living.  I have, and I do. I love the work of Donna Tartt, Tom Holland, Elizabeth Kostova, Alexander MacCall Smith, Antonia Frasier, Jacqueline Winspear, Nathaniel Philbrick, Nick Bantock, to name a few. (One of my 'finds' was a hardbound copy of Midnight in the Garden of Good and Evil by John Berendt—something I've wanted to own ever since reading a copy I borrowed from a friend.) Although admittedly, many of the "new" authors I read are writing about times past.  (Does that still count?)
But yes, books like Hemingway and Faulkner are in the minority on my shelves, because for the most part I've spent my time reading books from (or about) the 18th and 19th centuries:  Thomas Hardy, D.H. Lawrence, E.M. Forster, Jane Austen, the Brontës, Charles Dickens, Mary Webb, George Eliot, Robert Louis Stevenson, Arthur Conan Doyle, Leo Tolstoy, Fyodor Dostoevsky, Gustave Flaubert, Edith Wharton, Louisa May Alcott, Nathaniel Hawthorne, E.F. Benson.
It's time I corrected this deficiency.  Time to fill in the gaps, take a deep breath, and step into the 20th century.  If not in my mindset and disposition, then at least in the pages of a book. 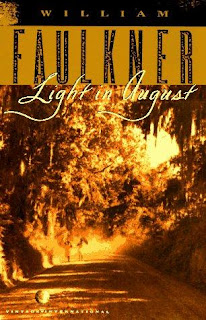 When the Voice of the Civil War was Stilled

I actually heard Shelby Foote before I ever saw him. It was nearly 2 decades ago and I was watching the Ken Burns documentary about the “Civil War” on PBS. A mellifluous voice was spinning out a description of one of the many battles, the soft hypnotic tones pulling me into a collage of tintype photographs that faded in and out of one another as a bittersweet fiddle tune played in the background. When they finally showed his face, Mr. Foote was seated in a darkened book-lined study, the cambray shirt open at the collar, the gentle eyes and whitened beard a perfect match for the soft drawl I'd heard in his voice. He seemed to speak of these battles and these people with an uncanny familiarity, as if he'd been there. It was only after I'd watched the series that I learned that he was the world's pre-eminent Civil War historian.
Recently, PBS has repeated the series and I fell in love all over again with this soft-spoken and learned man and wanted to learn more about him.
They say it was his “Southern storyteller’s touch” that inspired so many to read his three-volume, 3,000 page history of the Civil War, a history he worked on for 20 years.  When asked about the secret of his “flowing narrative style” he replied, "I can't conceive of writing it any other way. Narrative history is the kind that comes closest to telling the truth. You can never get to the truth, but that's your goal."

Facts, Mr. Foote said, are the bare bones from which truth is made. Truth, in his view, embraced sympathy, paradox and irony, and was attained only through true art. "A fact is not a truth," he said, "until you love it."
His friend and fellow Mississippi native, novelist Richard Ford, said of Foote that "he was a Southerner of great intellect who took up the issue of the Civil War as a writer with huge sanity and sympathy."
I had to smile when I read about his daily writing regimen:  “He would always write by hand with an old-fashioned dipped pen, and he continued that practice throughout his life. He kept bound volumes of his manuscripts, all written in a flowing hand, on a bookshelf in a homey bedroom-study overlooking a small garden at his Memphis residence. He said writing by hand helped him slow down to a manageable pace and was more personal that using a typewriter."
My smile only grew when I read this coda to his obituary:  "Known around Memphis as having little interest in parties and public gatherings, he was uncomfortable with the role of celebrity that the "Civil War" series brought his way. Though facing a busy city street, the two-story house was almost hidden from view by trees and shrubs. 'If I were a wealthy man, I'd have someone on that gate,' he said."
A man after my own heart. 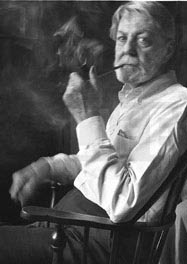